Last day on Sal and we manage to squeeze in another half a day of sailing - or at least Karin does - as the wind proves just not strong enough for my 73 kgs and 5.3. Instead I go boogie boarding with Lukas and Rasmus in the remains of yesterday's shorebreak. A perfect way to end two wonderful weeks with family and good friends with wind, waves and weather far above our wildest expectations. Sal, we'll be back before you know it. Obrigada e adeus! 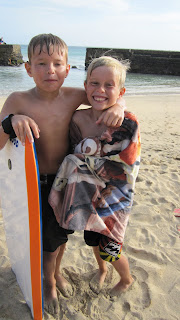 The swell that hit the island last night will continue throughout the day and with a high tide around noon we stay at the Angulo club in the morning and wait for the water to come down before trying Alibaba later in the day. Big sets are rolling all the way into Santa Maria bay and the big shore break calls for patience when trying to get out from shore. Karin, Eje and Peter all manage to get out without breaking anything but some of the less experienced sailors are not that lucky. A couple of broken masts and at least one ripped sail and the guys from Angulo and Fanatic are up to their ears helping save as much of their clients rental gear as they can - still with a big smile on their faces though, as some people totally misjudge the sets and immediately get punished for it.


With 3m + swell from NE and 15-20 knots from NE, this is definately a day for the west coast and in the afternoon, Peter and I go to search for the real deal. First stop Ponta Preta but like so many times before the wind is too light and too offshore for us daring to give it a go. Really big sets though as we head north past Canoa and finally reach the mother of all wave spots - Alibaba - and it really seems to be working this time!! Mast high set waves on the point and even bigger at Curral Joul and definately more wind than Ponta Preta. Very very offshore though and just a couple of kiters on the water - no windsurfers around. 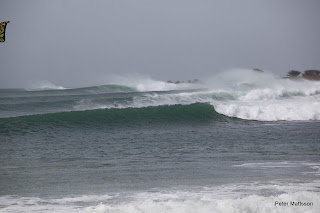 Going out with 4.7 it is an amazing feeling sailing downwind (!) towards the point with its roaring barrels and perfect lines pealing the whole way into the bay. The offshore wind direction is making it extremely difficult to catch this very fast wave and you really need to be dropping down the steepest section to get on the train as you go more or less parallell with the wave. After lulling around for quite some time I finally manage to catch a mid sized one, and racing down the face of that fast beautiful wave I realise this as close to perfection I might ever get in my windsurfing career.

Later, driving back to Santa Maria, with the sun sinking into the ocean behind us, it's with mixed feelings of both joy and disappointment. Joy over finally getting to sail one of the most incredable wave spots on the planet and a little disappointment over not being able, or not having the guts, to catch some of the bigger waves. If I´d only gone 50 m further up wind on some of those incredable beasts that now slipped under my board I might be in heaven right now. (or in the hospital for that matter)

Well, what the heck. It's always a bit sketchy sailing a new spot for the first time - and there was probably a reason why no other sailors were out. Next time the wind will hopefully be a little less offshore and then...

Waking up with a smile after yesterday's session at Secret and looking forward to whatever mother nature has in store for today! The swell is supposed to pick up in the afternoon and could reach up to 3.5 m tomorrow. With a wave period of 15-16 s things could get really disco. 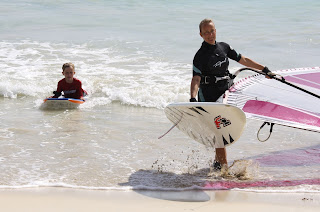 Karin goes flatwater sailing in the morning with 5.3 and 78L Guerilla while the kids rip in the shorebreak with their boogieboard. The boogie we brought with us from home is starting to fall apart so Lukas spent Gandmas Christmas money on a new one the other day. Rasmus is pretty keen on doing the same so on the way to the Pier we stop by the surf shop to spend the rest of Grannys money.

At around three we head back to the Angulo beach to find Karin, Peter and Eje tired but stoked after a great day on the water. Looking down towards Ponta Sino there is still not much of a swell but we decide to give Canoa a chance anyway. So we load up and twenty minutes later Peter and I are rigging up 5.3. Fun sailing and some really long lines. However, as the day start to fade and the few people on the water starts to drop off, the predicted swell finally hits the island and we get some super nice sets as the sun starts to go down over Mount Leao. Wow!

After a couple of days with light wind and no swell, things seem to be turning around. Driving past Canoa the wind is definately happening but the waves are still small so we stop at Mt Leao where the beach is more child friendly. Karin rigs up a 4.7 but soon has to change to 4.2 as the wind is picking up even more. A small wave is rolling in around the point but most of all it's really windy!


While Karin, Peter and Eje are blasting around over the white caps, I and the kids take the car to see if maybe Secret is working - and it is!! Half mast to logo 4,7 and only three guys on the water. 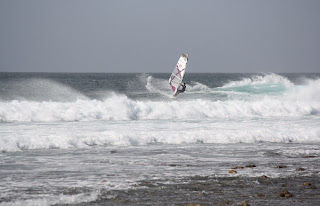 We go back to wait for the others to run out of battery and after a quick tuna sandwich Peter and I head back to Secret. Still 4.7 and some really nice sets lining up on the reef. One of the guys just broke his mast and after a short while the remaining two guys go back in and there I am, cross off-shore 4.7 and a 16s swell - all to myself. Pretty un-fucking-believable! I even have my own camera man on the beach, thanks a bunch Peter!!


﻿
Waking up to another lovely day. Maybe a bit more wind than yesterday? Morning walk to the bakery with the kids. Half kilo bananas from the fruit woman on the corner.

Karin prefers to sail "at home" today so after breakfast we all head down to the beach and while Peter, Karin and Eje go out sailing the boyz go for a little dirt road drive. Everyone gets a go. Lesson two: the gas pedal.


In the afternoon we take the car to the pier to see if there are any waves but it is too flat for surfing so Rasmus and Lukas play around in the shorebraek while daddy stays in the beach. Lukas also discovers the outdoor capeverdian concrete gym on the beach and decides to do some workout.

In the evening - dinner at Ojo de Agua with Peter, Eje and the house band. 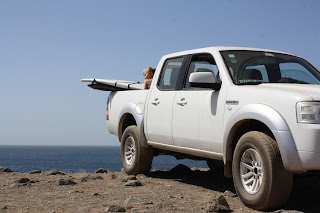 Calm morning. Long breakfast. No rush. First day without wind since we arrived and we decide to drive around the island and do some sightseeing for a change. First we go to Burracona which is a natural pool formed by the lava just north of Almeira on the west coast. With the ocean being relatively calm, swimming in the pool is no problem and it´s a blessing to cool off in the crystal clear water. The kids are swimming about and jumping from the cliffs like there was no tomorrow. A local guy asks if he can borrow my mask to try and find some lost keys. Last week, he said, a tourist was swept into the pool by a big wave that almost had him killed but he got away with some broken bones, besides losing his camera and his car keys.

From Burracona we drive east through the dry land up to Espargos and then down hill to a small fishing town called Pedra de Lume on the east coast. Next to Pedra de Lume is an big crater in which there is an old salt production plant from the beginning of the 19th century. Now it is mostly a tourist thing even though some production still seems to be going on. For 5 euro they let you in to see the place (which is pretty spectacular) and you can even take a swim in one of the salt pools. Just like the Dead Sea - and you don't have to go to Israel...

After the mandatory swim in the super salt water, we go back to Pedra de Lume for a freshening swim in the ocean. The beach in Pedra de Lume is actually pretty nice and with the calm sea, Peter, Eje and I go snorkeling off the rocks. The tiger sharks are only active at night, right? SUP and boogie boarding is also on the agenda before we finally head back south with the sun going down behind us. A beer at Angulo's and fish of the day at Compad - what a day!﻿
﻿﻿﻿﻿﻿﻿﻿﻿﻿
﻿﻿

Accoording to the forecast for the coming days, the sunny, warm weather will continue but it seems like the wind will be less strong. No stress! After breakfast and some school work we fill up the car with toys and go search for wind and waves. We decide to go north and check Sectret spot. Secret spot (aka Tras Leao meaning "behind the mountain") is one of the first spots to get a good wave if the swell is not that big. The easiest way to Secret is taking the main road past Murdiera and then simply take left in the roundabout and head out in the waste land. Once offroad just continue until you reach the water and then turn right :-)

Just south of Mount Leao there is a nice point break for surfing and in the bay there is a sandy beach with waist high water a long way out. Perfekt for boogie boarding and surfing. Secret spot turns out to be to small for sailing so we continue a bit up on the mountain and around the corner and there we find a big bay with really nice lines.

Going counter clockwise around Mt Leao turns out to be mission impossible - even for our Ford XLT - so we have to drive back the way we came.

﻿﻿
We finally end up at the beach on the foot of Mt Leao. Nice, easy surfing and boogie boarding with the kids. Around noon the wind suddenly picks up and we get some fun port tack sailing for a change in the small waves - all for ourselves.